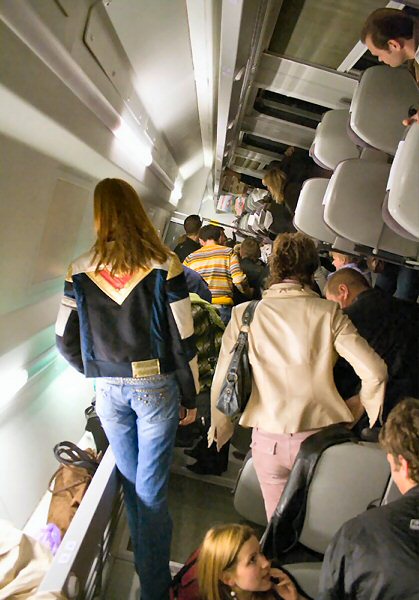 Exiting the hatch should be interesting.

UPDATE: Thanks to a link from Reddit, here’s the story. It was a metro accident in the Ukraine in May of 2007 [story here]. Via Google Translate, we get the gist of it:

Metropolitan Express. As it were. Events eyewitness.

In short, what it was. I sat down today in the 167th Kiev on the Dnieper-Pjatihatki-butt. Conductor took the tickets, but never gave.
We drove normally. As always, stupid movie, as always tea. Already around 22:30 it started. Essno flashed in an instant. I drove the car at the very beginning, back in the direction of travel, which insanely happy. Before us was the only car-wagon. Let’s go, go, suddenly thrust. As always, the first thought when you wake up at night from the jolt in the car – push and settle down. But no, the car started to throw from side to side. Then he began to lurch from grinding. On the shelves poured luggage. Among the passengers was not much noise. When everything had settled down, began to understand everything and everything is in order. The car does not hurt anybody, like the conductor saw that hurt.

The first car the most, not counting the first section of the lock, fell on its side. My neighbor’s window was covered with a grid of cracks. The rest remained intact.
The first desire of passengers – more quickly get out of the car. But there sounded clever ideas: we do not know where we are, whether we will still fall and in what condition the car. Quickly came to their senses when they saw the rail under the windows. Began to slowly get out out through the usual exit.

Arriving in itself, took the camera and started klatsat. Photos will be later. People also podastavali camera down, and phones. And all so much fun. Smile Behind the scenes sounded a joke: “Call the conductor, even pick up the glasses.”

Almost all the passengers taken away somewhere having taken the train. I left the coach with its neighbors in a jeep. Waiting for him in the house SHCH, where the police had no news from privoloch who took Marauder – found him two new pairs of women’s shoes in a box and a bunch of canned goods. My uncle was a kind and take a drop too much baggage to explain the origin could not.

Train wreck in 70-100 meters from the little station Rasava Southwestern Railroad around 22:30 on Wednesday May 2, 2007. This, in my mind, the first serious accident “Capital Express”.

PS That’s really never would have thought that out of the car past the boiler so narrow, if selected by him when he is in a horizontal position.