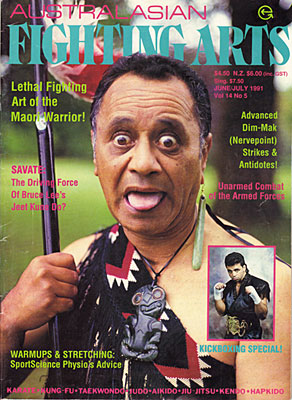 [Image and quote from here.]

“I think this (death point striking) art should die. It is too evil for today’s society. I once witnessed my grandfather having an argument with another man and the other man was in the wrong, so my grandfather just got up and struck him with one finger to one point and the man died… “

The interview is interesting, and includes what to do if confronted by a Maori showing his war face:

Fortunately, you’re unlikely to encounter a Maori warrior unless you’re in New Zealand, but now you know how to react without bleeding– much.

[Crossposted here a while back.]

3 thoughts on “Show Us Your War Face”