[Found here, here (via here), and from page 4 of the June 2009 issue of Smithsonian.  Might have to create a new category for stuff like this.]

Odd.  Consider it a cartoon before the main feature.

Best opening sequence for Cheers without the cloying theme song.

I was prowling for some early Thunderbirds when I found a name I’d forgotten about.  Here’s Kid Ramos and Los Fabulocos cranking on “Burnin’ the Chicken” in New Braunfels, Texas, 21 March 2009.

This is the funniest version of Dylan’s “It Ain’t Me, Babe.”
The Turtles made a mockery of  pop love songs, but created a decent string of hits anyway. Flo and Eddie eventually joined Frank Zappa’s Mothers.  (Mrs. Strutts pointed out that Eddie dances the Freddie at the end of the clip.)

Don’t worry.  The monkeys won’t starve until their providers run out of food. 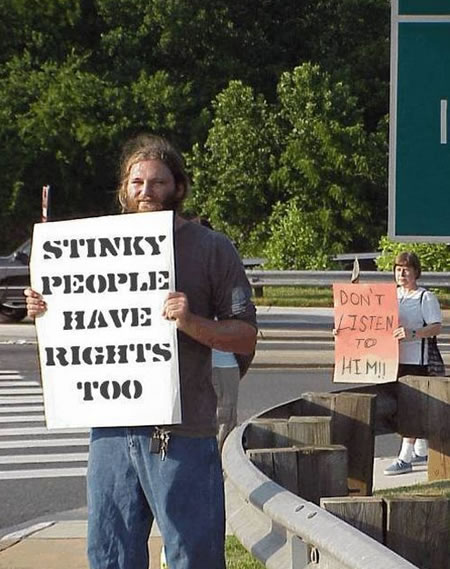 Email your best remake in . jpg format,  and we’ll assemble them for a future post for you to vote on your favorites.  Of course we’ll give you/your blog credit, endorsed with a link.  (Don’t have Photoshop?  It’s easily done with MS Paint; see below the break.)

Send your best shot to bunkstrutts at verizon.net by 30 JUNE 2009 with the title “PROTEST” in the subject bar.  You know what to do. Keep it clean:  PG-13 max.

Some folks spoil all the photos.

“Legendary musician Frank Zappa and his wife Gail discovered The Persuasions (in a commercial sense) in 1968. At the urging and encouragement of a good friend of the Persuasions, David Dashev (who eventually became the groups producer and manager), Zappa listened to a tape of The Persuasions. Shortly after listening to the tape, Frank and Gail Zappa signed the group to their label. The Persuasions debut album ‘Straight’ was a mix of studio and live recordings released during the fall of 1970.”

(This group was featured here before, but unfortunately the videos were yanked by Utoob for seventy mental reasons.)

This is an old one from the Beeb, narrated by David Attenborough.  It’s cool, bizarre and gross at the same time, but it’s nature. I posted it just because  Thelit said her kids and their friends love this kinda stuff.  Go for it.

After the Slugs (wasn’t that a Grateful Dead tune, or maybe a Peter Sellars movie?) this may help clean your eye sockets. Other than the dopey devilpigs,  it’s all cool.