I found this quarter in my pocket last week. Made my day.  Thanks to whoever you are, and lemme know if you want it back.

Aside from cropping the scanned image, no other adjustments were made. Honest.

Santa Monica, CA (Strutts News Services) – Legendary mariner and celebrity, popularly known as “Popeye” passed away at 2:30AM PST Thursday at St. John’s Health Center in Santa Monica, California.  Leaving behind no documents to prove his full name, Popeye suffered quietly for years from complications caused by hypertension due to  a lifetime of sea salt inhalation.

Popeye’s last words were reported to be, “That’s all’s I can stands, and I can’t stands no more!” before he drifted off.

END_OF_DOCUMENT_TOKEN_TO_BE_REPLACED

Okay, let’s get it out of the way.  I’m talking Michael Jackson.
Click here and here.  Done.

Freedom. Worth fighting for.

Set up smackdown [via].  These guys show up in a couple of other videos, so I suspect it was staged.  I thought it was funny.

This is bizarre.  Louis Armstrong and Johnny Cash playing a 1930’s Jimmie Rogers song.  The guy who posted this to the Utoobage added this comment:

“I would have never guessed, but Louis Armstrong was a guest on the Johnny Cash Show. This and the story about Satchmo and Jimmie Rogers show how diverse musical tastes these men had and once again that music is a great connector.
This is from episode 38, Oct., 28, 1970 and must be one of Satchmo’s last performances. He was such a great performer right to the end and the Nashville audience and Johnny just loved him.
Louis Armstrong cracks everybody up at the start of the song: ‘Let’s give it to ’em in black and white.'”

Other news. Two folks on our blogroll could use some words of encouragement.

Chiqui had a stroke, and is recuperating, although he’s lost some use of his hands.  His english is almost as bad as my spanish, but you might want to leave a comment here.  Here’s an alternate link to a (poor) spanish-to-english translation: here.

“This detailed astronaut photograph is exciting to volcanologists because it captures several phenomena that occur during the earliest stages of an explosive volcanic eruption. The main column is one of a series of plumes that rose above Matua Island on June 12. The plume appears to be a combination of brown ash and white steam. The vigorously rising plume gives the steam a bubble-like appearance. The eruption cleared a circle in the cloud deck. The clearing may result from the shockwave from the eruption or from sinking air around the eruption plume: as the plume rises, air flows down around the sides like water flowing off the back of a surfacing dolphin. As air sinks, it tends to warm and expand; clouds in the air evaporate.” 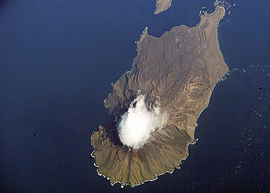 Which way was this “detailed astronaut”  being pointed when the picture was taken? What size mm lens, what film speed (400 ASA or greater?) and what was his/her f-stop setting?  Where was this detailed astronaut’s aperature located?  Who aimed the astronaut?  How on earth did he/she control the shutter speed?

Regardless, it’s a cool photo.

Khyber Pass, Afghanistan, 1955.  I wonder if camels and donkeys got tickets for blocking traffic.