Elvis and the rhinoceros appear daily at 10am.
Top image from Google Maps Street View. The faces were blurred out, so I had to take a closer look, and it’s more awesome than I imagined. (The note on Elvis’ guitar reads “Neck is broke don’t bother stealing.” I checked, and the King’s neck is intact.) 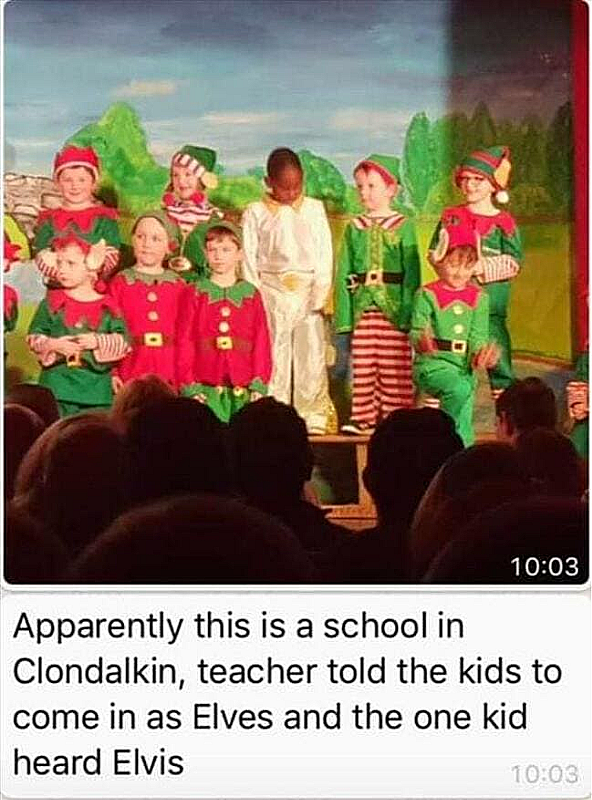 Kid’s got a killer costume, and is way cooler than the others.
Blue Christmas, indeed. Don’t Be Cruel, he’s All Shook Up.

Say, “Ahoy, matey, dis be der ninetain off Septembarrrrgh,” or “Bring oat jer booty an’ I’ll let yer play wit me byrd,” and get a free donut. Do it while wearing an eyepatch, black tricorn hat or head scarf, striped shirt with tattered pants, a cutlass or dragoon, and a parrot on your shoulder and you’ll get a dozen. TRUE.

Riding electric scooters around the desert with space babes.

It sits on top of a refrigerator – somewhere – and it’s disturbing.

Ray Charles won three consecutive games of chess against Willie Nelson according to Willie Nelson. Sure he did, Willie [via].

Auf den leiben einer Wanderzelle IV. According to Google, that translates to “On the legs of a walking cell IV,” the caption here says “the perspective is an anatomical landscape from the inside of the nostril looking out.” There’s even a cute little booger.

This is a Kinesin Motor Protein. More about them here.

Talking Heads‘ classic “Swamp” performed at the London Wembley Arena 1982. It was released the following year, creeped me out, and I became a TH fan.

Ry Cooder‘s swamp-rock cover of Elvis’ “All Shook Up” may have been posted here before but so what –  it’s awesome and it fits the theme of this post.

“Now, Amos Moses was a Cajun. He live by hissef in da swamp.”
This is the best cover of Jerry Reed‘s “Amos Moses” I’ve ever heard. The Sensational Alex Harvey Band took it and made it nasty. (This 1976 video is from the German TV show Pop Scop.)

That’ll do for this edition of The Saturday Matinee. Have a great shopping spree, folks.

This is kinda cool. Elvis’ version of “Blue Moon” jammed with a reggae beat that turns to ska and back. Unfortunately there’s no entertaining vid, so I’ll just post the link for the music. You’ll love it.

So where do we go from here? “Blue Moon” of course.

The Marcels‘ version is my all time favorite, for what I hope are obvious reasons. Have a great weekend folks, and come back tomorrow for  more insipid and vapid trepanations.

That’s Steppenwolf, as if I had to tell you. “Born To Be Wild” was released in 1968, as was “The Pusher,” written by Hoyt Axton. Axton also wrote “Joy To The World,” a major hit recorded by Three Dog Night, and one of the worst songs in rock history, IMO. I refuse to post it, so I’ll go with this 1970 classic:

“Mama Told Me Not To Come” was written by Randy Newman.

I don’t care much for his politiks, but he’s a funny guy. Hell, anyone that can blatantly mock L.A. without Los Angelenos catching on is all right by me.

Okay, I looked for a decent vid of X‘ “Los Angeles” but settled for “Johnny Hit And Run Pauline” instead, just to keep the vibe going. (No, really. I looked. Serious Ramones influence on that.)

Now back to Hoyt Axton. His mother wrote this: [Insert John Cale garbage here] I can tolerate a lot of alternative experimental stuff, but John Cale’s version of “Heartbreak Hotel” is so wrong.

This, on the other hand is honest: Paul McCartney plays Hoyt Axton’s Mom.

And with that, we’re out of here. Have a great weekend, folks, and be back tomorrow for more stuff. 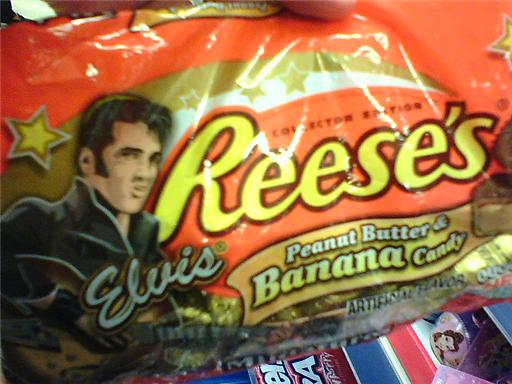 What young Bunky liked better were peanut butter and sweet pickle sandwiches, combining the flavor of Jif with the crunch of baby gerkins. And vice versa.

Fortunately, Reese acknowleged that these bastardized confections have artificial flavor, so you can rest assured that it doesn’t taste exactly like the King. They made up for the chicanery by labeling the bag, “Collector Edition,” thus snagging all the compulsive candy-collectors investors hoping to score big bucks months or years from now in the Reese’s Cups futures market.

So just how many bags do you have stashed away in your safe deposit box?

No other country in the world has Elvis impersonators on mini-bikes. (Take that, Ma’am Odd Imadinnerjacket.)

[Photo, made in USA, can be found here.]