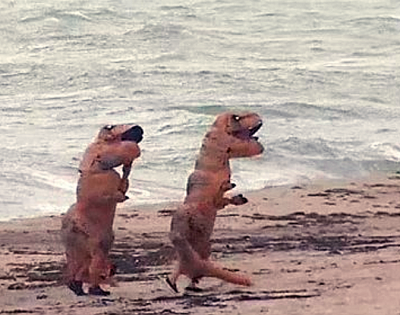 Dinosaurs washed up on Florida beach prior to arrival of Hurricane Matthew.

Friend from Jacksonville rode it out & posted this.

Coffee table lets you ponder the ocean depths. At this scale, whales and ships are microscopic, so you’ll need a few tokes to fully appreciate it.

One of the best Tweets by a CNN “journalist” ever.

Climate catastrophe was predicted in 1873 [Source] and it never happened. Via the The July 10, 1873 Decatur Republican (Decatur, IL) :

We have heard from our ally, Prof. Plantamour, again. Last year he prophesied we were to be burned up. Now he declares in a paper just issued in Paris, that everybody will be frozen to death in the year 2011. We are glad to have the date accurately fixed, for we shall arrange for our life insurance policy to expire in the year 2011. The first news of the freeze will appear in the Saturday Evening Post for Jan. 1st, 2011, an we shall offer as a premium to clubs that year, an all-wool overcoat four feet thick, with an air tight stove in each breast pocket, and a gas heater in the tail, and an open grate arrangement at the collar. The getter up of two clubs will have a pair of skates, and a double breasted pink undershirt thrown in. Persons who wish to compete for these prizes, can send their subscriptions now, from this year to 2011, in order to make the thing certain. No paper shall beat us, if we have to get up a corner in a double-breasted undershirts and create a panic in the market. –Max Adeler

Raccoon Whack-A-Mole. The music is really annoying, so turn off the sound. You’ve been warned.

THIS is a happy dog.