The other day, I was examined the contents of the digestive tract of Giant isopod who died.

in individuals captured after the date has not passed, it does not eat food in the aquarium.

Stomach contents, you believed that you were eating in the food or the seabed in the trap at the time of capture.

Previously, there was a thing that was introduce another individual of the contents, inside also this individual digestive tract had been filled with undigested material.

Weight of stomach contents is 128.5g, because body weight was about 1000g, you pretty now that it was at once ate a large amount of food for the body weight.

In texture you whether referred to as a “massive”, “soggy” This time, such as the internal organs of something if from the color feel of the … squid?

Smell is stronger, but because it was unexpectedly pond likely feel it when I smell, I tried to make sure the taste is a little lick.

Even I feel taste.

When you leave for a while and left at room temperature (22 ℃), so went more and more soluble in muddy, I felt that you are self-digestion. Do Will contains a large amount of enzyme.

After that, I was a survey of solid was strained with a net, but this time in as long as it was confirmed by eye scales of fish are not included at all, there was still many just squid beak.

Most but is small enough width 7mm, even things like pieces of a large squid beak is in.

This individual seems to have apparently eat squid. 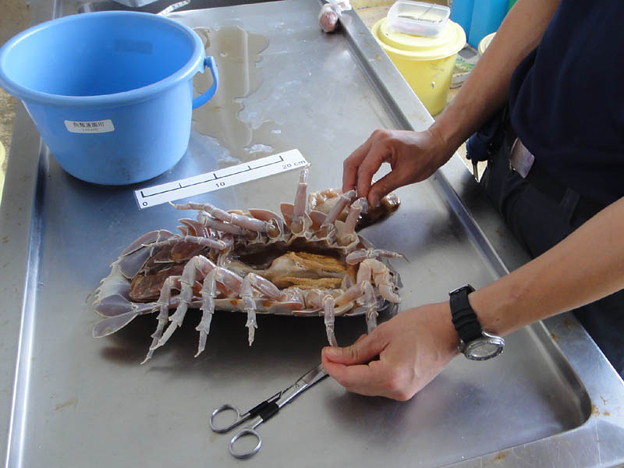