Anyone may steal and repost that image. Original found here.

These are the same types who claimed that “Everybody Draw Mohammed Day” was blasphemy and worth killing people for it. Nevermind that images of Mohammed have been painted and reproduced for centuries.  Every one of those little blue assholes on the map should be targets, IMO, and they probably are already.

Do I really have to add a caveat that innocent non-combatants be saved?  Yeah, I do, because I don’t believe that all Muslims are extremists, never have. Can’t defend the Wahabbist assholes, though.

“I see this and I think, cripes, man, have you seen even PART of that ridiculous shitty thing?  It’s all blackface and offensive mostly because it is so poorly done, designed to offend, like a joke that is all punchline and no build-up.   To be offended by that piece of shit is an offense to me. […] C’mon, Arab World, riot over some shit that matters.”

Did you spot that […]?  That’s where the commenter went scooters and blamed GWB. Otherwise I agree with him.

UPDATE 9:00PM 15 September 2012:  I don’t care how stupid, ignorant or deranged someone is, but this ain’t right. The guy has a Constitutional First Amendment Right and was arrested FOR EXPRESSING HIS OWN OPINION.

Folks, this is very wrong, and very disturbing. 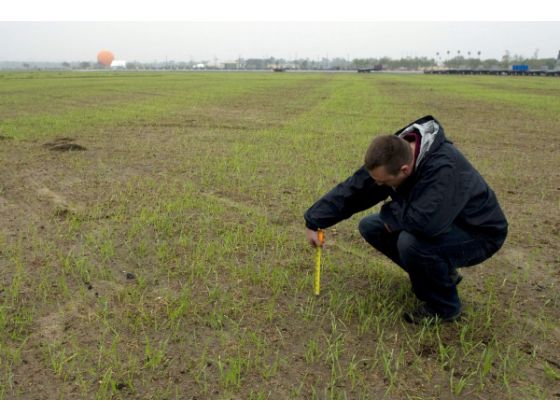 Tyler Stevenson, an urban forester, measures barley that is growing in the fields at the Great Park on Friday morning.