The missus’ Uncle Harry was there. The Japanese were strafing the airfield, and Harry dived under the heaviest piece of equipment he could find.  He found out later that it was an ammo truck.

Harry survived the attack. Many did not.

That’s a scan of my late Dad’s rubber stamp. He used on all his snail-mail correspondence.

Annotated Draft of “Day of Infamy” Speech: Joint Address to Congress Leading to a Declaration of War Against Japan by Franklin D. Roosevelt, December 8, 1941. 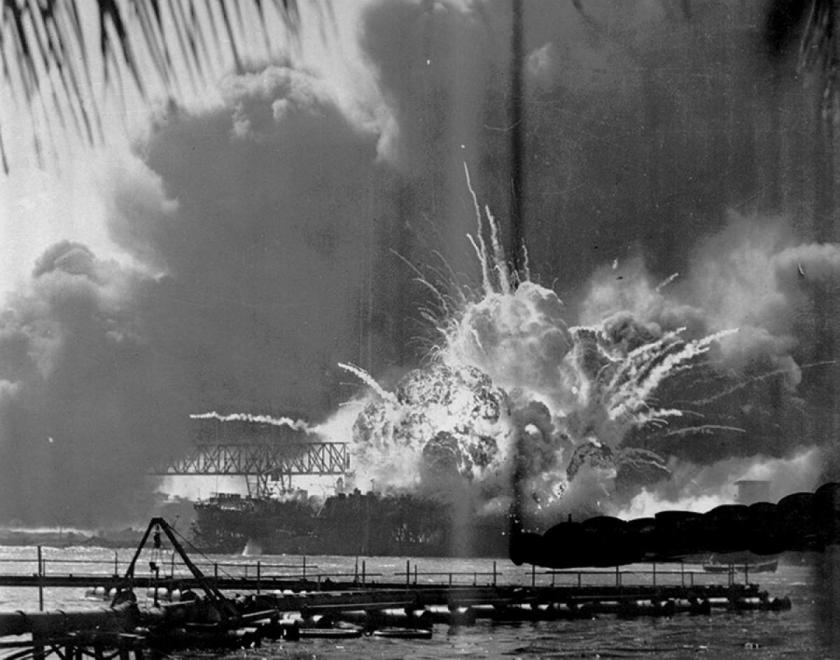 There was no Declaration of War until after the attack.

The United States of America was cold-cocked and sucker-punched on this date 73 years ago mostly due to the ignorance and ineptitude of C students in Washington D.C.

Previous posts about The Day Of Infamy here.

…and deliver us from evil.

Those words are as poignant today as when the Lord’s Prayer was written, apropos in 1941, and especially applicable in the long aftermath of 911.

Never forget that there was no Declaration of War until after the attack. Image from here includes this description:

Photograph taken from a Japanese plane during the torpedo attack on ships moored on both sides of Ford Island. View looks about east, with the supply depot, submarine base and fuel tank farm in the right center distance.
A torpedo has just hit USS West Virginia on the far side of Ford Island (center). Other battleships moored nearby are (from left): Nevada, Arizona, Tennessee (inboard of West Virginia), Oklahoma (torpedoed and listing) alongside Maryland, and California.
On the near side of Ford Island, to the left, are light cruisers Detroit and Raleigh, target and training ship Utah and seaplane tender Tangier. Raleigh and Utah have been torpedoed, and Utah is listing sharply to port.
Japanese planes are visible in the right center (over Ford Island) and over the Navy Yard at right.

Although Japan is no longer our enemy, there are others willing to do it again.  Is our government’s new administration willing to accept this probability, or are they going to ignore the odds and wait until history repeats itself?