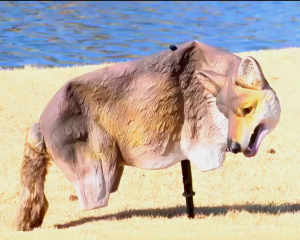 On 24 January, Mozilla disabled the popular “Web Of Trust” (WOT) add-on to the Firefox browser due to security / privacy breaches. Other browsers that allow the add-on (Internet Explorer, Chrome, Safari, etc.) are affected as well. The problem was verified by a German team last November, and has yet to be remedied by the WOT engineers.

Lightning strikes as seen from space.

Lightning strikes caused by a volcano.

Bears with chainsaws. Some of the images are very cool.

Hunting snakes in the ‘Glades: Professional snake trackers were brought in from India to help with a python problem.

Anxiolytic effect of hepatocyte growth factor infused into rat brain. I typed in some random letters into a Google search to find this gem.

[No, that’s not a coyote carcass on a stake in the top picture. It’s a scaregoose. Really. Story here, via here.]