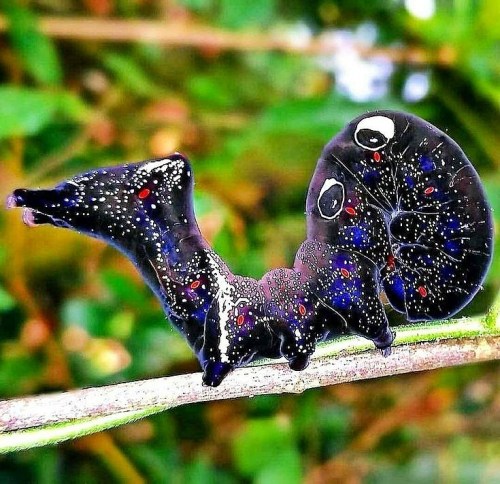 The larva of the Pacific fruit-piercing moth eat leaves and are usually kept in check by Trichogramma, tiny parasitic wasps.

The moth stage does the real damage. The adult moth flies at night and sucks out the juices of ripe mango, banana, tomato, melon, citrus, guava, papaya and other fruit through its nose, and is considered an economic pest in the Pacific Basin Area.

In December 2007 we broke this news story (image above) and the main-stream media ignored it. Some commenters here dismissed it as absurd lies and #fakenews, while others provided first-hand accounts and evidence. Suddenly and without warning, a cryptic hint about new evidence appeared recently:

We contacted Ms. Ally because we just had to. It was well worth it: apparently the rare Giant Woolly Bear caterpillars are infesting parks throughout the US northeast, and she provided an original un-enhanced photo to prove it.

Ms. Ally did not return requests for specifics, i.e. location, number, unusual behavior, mating songs or personal hygiene, but we will update this post with further information when/if it becomes available.

This made me smile, but not for the reasons you think.

Bunk grew up in the eastern U.S. Regional lore maintains that the severity of each coming winter can be predicted by examining the size of the brown band of the Woolly Bear Caterpillar:

According to legend, the severity of the upcoming winter can be judged by examining the pattern of brown and black stripes on woolly bear caterpillars–the larvae of Isabella tiger moths. If the brown stripe between the two black stripes is thick, the winter will be a mild one. A narrow brown stripe portends a long, cold winter.

This specimen from September shows no black bands at all, suggesting that the winter of 2007-08 will be one of the warmest on record and we’ll all be grilling hot dogs and burgers in January. You can find a couple of curious videos of these giant freaks of nature here.

Here’s a normal sized one, sleeping:

[Quote from here. First image from a site with an unfortunately inappropriate name that we won’t post on this site. Second image from here.]