Iraq war veteran (Airborne Infantry) bought a plot of farmland in rural Virginia and discovered that something came with it. Grab a mug and listen to his story.

Junior Wells‘ performed his 1960 hit “Messin’ With The Kid” live in 1993. The Blues Brothers did a decent cover in 1978, and this version by The Healers is killer.

The Healers have one fine lineup, and one fine cause.

Roy Buchanan (1939-1988) was one of the greatest unknown blues guitarists in modern history. Have a listen to “Roy’s Bluz” live in Austin Texas, 1976. [Related posts here.]

Have a great weekend, folks. Got a nice assortment of Hot Links for you to sift through tomorrow.

That made me smile. 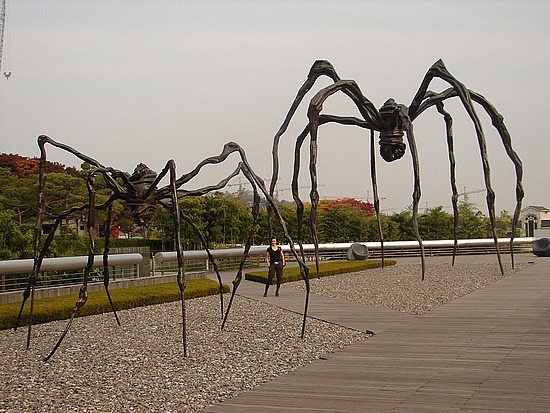 Bugs I can do…spiders…not so much.

Damn near wrecked my car once on I-81. Flipped down the sun visor and a big-ass spider, about the size of a manhole cover drops down about 6 inches in front of my face and just hangs there swinging ever so slightly on his 200 lb. shock cord, about as thick as my thumb. We were eye-to-eye and even with my sun-glasses on, he had me outnumbered 2 to 1. It was so big it completely blocked my view through the windshield. I think I blacked out for a moment because the next thing I remember I was off the side of the road, trying to get out of my car, with my seat-belt still hooked in.

I noticed my sunroof was open, and off to the side of the road something caught my eye. I saw what I thought looked like a deer being dragged through heavy brush with a similar colored shock cord with 2 big puncture wounds on his neck…and a hairy leg as big around as a telephone pole disappearing into the thickets.

It’s a good thing too, because if I’d have gotten out of my seat belt, that spider would have got a whoopin’ to end all whoopins.

I was back from college on Easter break. The Weasel and I were cruising the southwestern Ohio sticks with a 12-pack, talking trash and listening to 8-track tapes when nature called. I pulled my ‘57 Chevy into a dark parking lot behind an elementary school and stopped.

Before we were out of the car, headlights flashed from the other end of the parking lot and rushed toward us as another car skidded to a stop just behind, blocking us in. The police ordered us out of the car at gunpoint.

Suddenly we didn’t have to pee so bad — we had to pee worse.

Shining a flashlight around the inside of the car (and spotting only the beer) the cop remarked that there were no rocks or baseball bats. Seems that there had been some vandalism at the school, and the police were staking it out.

We explained why we were there, that we’d just stopped to take a leak. The officer said something I’ll never forget: “To go driving around with a friend and having a few beers is okay.”

And with that, he let us go.

What a children’s classic, complete with illustrations of horses drinking and smoking. The plot summary of this 29 page work of excellence follows [spoiler alert]: 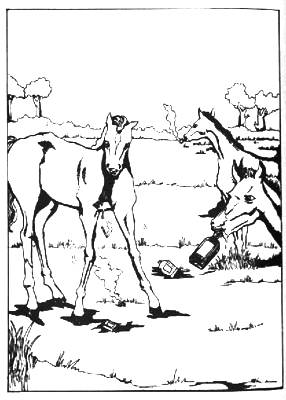 There are many questions left unresolved in this pressure cooker, like where do horses get drugs and alcohol and how do they pay for it?  Who in their right mind gives horses lighters and matches? How do horses hug?  Why did  Latawnya, the Naughty Horse, have to try out smoking and drinking first before she came to her own conclusions? Guess we’ll have to wait for the sequel.

[Fully illustrated novel may be reviewed in its entirety here.  Found here.]