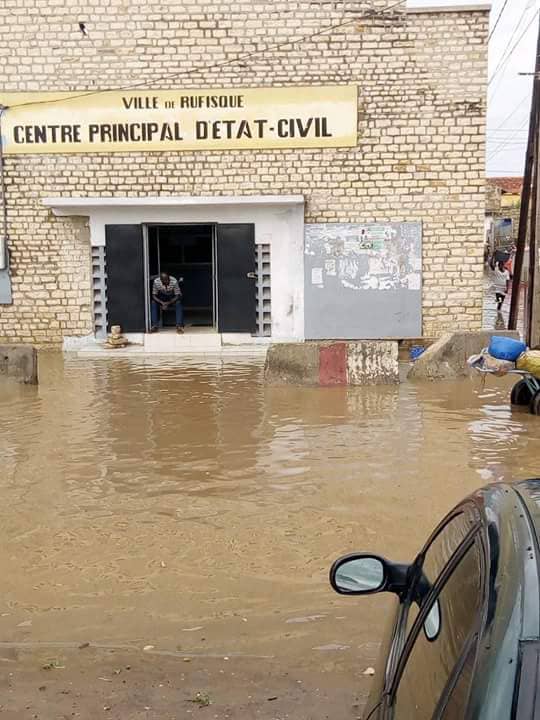 No ! We are not in Venice, but in Rufisque, the old city. Very heavy rains have ended up invading the entire city and exposed the glaring lack of canalization of this city. Thus citizens of Rufisque are organizing, in a real platform to apply for Rufisque the right to a healthy environment, as voted in the referendum of 2016. These citizens of Rufisque ask the government to trigger the plan ORSEC to save this city drowning more and more in broken promises. Also, they invite the Ministry of water and sanitation to decide on the 10 billion of BADEA funding for the final settlement of the sanitation issue in Rufisque and more particularly the canal. Indeed, they say “the announcement of funding has been made since January 2017. Nearly two years later, nothing. We also call on the government to intervene with UNESCO for the rehabilitation of our old heritage buildings. According to them, “the market deserves to be rehabilitated in the image of those of Ziguinchor, Diourbel, Thiaroye. We also invite NGOs working in the environment to look at Rufisque. The issue of CSR needs to be revisited. The Sococim as well as Valda and Senelec at Cap des Biches do nothing for this city whose municipal authorities have finished resigning their missions. We know that the municipalities of Rufisque do not have the means to solve the flood and canal equation … So only the government can help the Rufisquois get out of the nest, they concluded.

In case you’re living in a closet, there’s some nasty weather going on down south with a killer hurricane underway.

Led Zeppelin unapologetically ripped off Memphis Minnie and Kansas Joe for one of their greatest hits.

On the other hand, this blues jam was an original.

So what’s next? Maybe a Rainy Night In Georgia.

To my friends down in Texas and Louisiana, keep safe.

[All found in here. Warning: there’s some odd redirecting going on at that site.]

A Dutch local resident, standing in his house, looks to high waters level through his window, in Dordrecht on January 5, 2012. Gale force winds reaching up to 110 kilometres (about 70 miles) an hour as well as heavy rains are expected along the Dutch coast. About a quarter of the country sits below sea level.

That’s hella scary. There’s a lot of hydrostatic pressure on the base of that wall, and I wouldn’t want to be standing there when it fails. [Found in here.]

The hills of Western Hungary, after a flood of toxic red sludge from an alumina plant engulfed several towns and burned people through their clothes.

Nope. Not a Photoshop.