Earliest Tineye image search results link to various Chinese websites (deleted or defunct) ca. February 2008. One source claims these women were accused of witchcraft, which suggests that the picture may have been related to religious persecutions that occurred during the Taiping Rebellion and/or the later Boxer Rebellion.

Religious persecutions persist in modern day communist China, and they are brutal:

“Rooted in atheism and materialism, the communist regime has been brutally suppressing Uyghur Muslims, Christians, Buddhists, and Falun Gong practitioners for years. Those who refuse to comply with the CCP’s orders are detained and taken to secretive “re-education camps” where they are subjected to unimaginable abuses, including gang rape and electrocution.” [Source]

Wow. No. 580. That means that we’ve collected and posted approximately  1,740 .gif animations to date. My how time fries. “A 65-year-old resident of a Chinese village named Huang Shiguo has been making paper according to old traditional technology for the last 36 years. According to him, for a month he produces about 3,000 sheets of such paper, earning about 9,000 yuan or 1,400 dollars.
[Huang] argues that paper made in a traditional way is much more durable, quality and soft compared to the manufactured methods. The master sells its products in the local markets of China.”

At time of posting, 9,000 yuan is equivalent to US $1,355, so each sheet of handmade paper earns him about 45 cents. Not bad, given the cost of living in rural China, but he’s not living in rural China. He’s demonstrating and preserving ancient technology, and selling his expensive product while living in a tourist mecca. Pure undiluted capitalism. Kudos.

“Huang Shiguo, 65, makes paper using ancient methods in his home in Baishui Village, Qiandongnan Miao and Dong Autonomous Prefecture, Southwest China’s Guizhou Province. Huang said he began learning the traditional paper-making craft at 29 and has been dedicated to the ancient craft ever since. Locals in the area have a more than 1,000-year history of paper making as the region is rich in Yangshan Bamboo, a main material needed for the craft. Huang said the typical process involves 72 steps and 55 days to produce paper.”

[1st & 3rd .gifs found here and here. The second is my own from this image, because I liked the screaming color morphiness of it all.]

A Chinese girl poses for fun with a 3D painting at an art exhibition in Jiaxing city in east China’s Zhejiang province.

Makes all kinda sense to me. She’s one of those folks who believes that if all the Chinese jump into the air at the same time the Earth’s orbit would be changed forever and we’d, um, have to do something about it, like tell her to stop. [Image found here.]

Regarding THIS CHALLENGE, everyone who submitted a .jpg file of a guy pointing directly at the Hi-Def camera during the NY vs. Boston game, 4 July 2008, at Yankee Stadium, won the prize.

Note that everyone who won is named Mik. 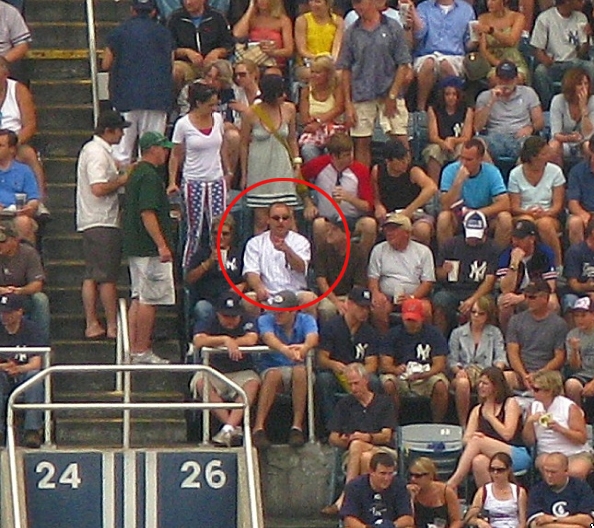 Here’s Mik‘s Winning Entry above, but it was not the one I was looking for.  Here’s the one I found below: 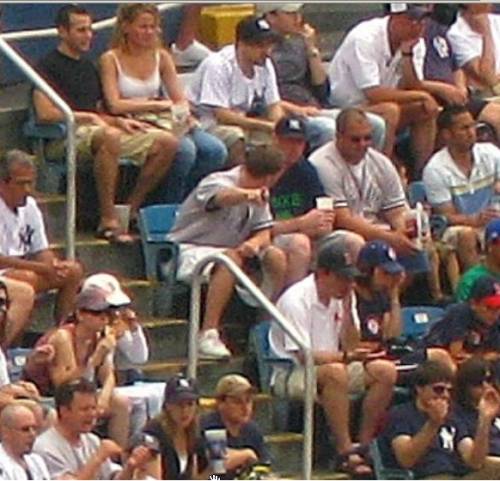 Since everyone (Mik) who entered emailed me to complain about the time they wasted trying to find the Pointer, I emailed Mik back with a detailed description of his prize:

Shown at right in its display case on top of tonight’s leftovers, it keeps time, beeps and lights up (as shown below right) and times things once you figger out the directions.  It’s apparently a knockoff of something made by Timex, but also something a 10 year old little bastard would prize until he finds out through trial and error that “water-resistant” doesn’t necessarily mean the same thing in Mandarin.

Mik had so much annoying fun with this contest that he’s declined his award (he already has a Chinese “sportwatch”) and is willing to donate it to a future event.  Bunk never argues against generosity.  Y’all are forewarned.  Another competition is in the works.  Or not.