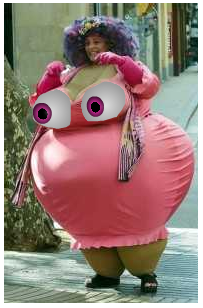 Too stupid not to share.
Slow to load; worth it for the lulz.

Do Not Click This Link, especially if your speakers are turned on.

How to draw The Simpsons by a Simpsons Artist.

In Ten Words is a nice theme blog. Ten words max per post.

What kind of man follows Tacky Raccoons? Dan dances with dogs, but also shreds the blues.

Attack Waaaaatch!  Can you imagine the msm outcry if any GOP candidate put up a website like that? The whole Big Brother concept of “Attack Watch” is so ill-conceived and smarmy, I’m stunned that Obama’s reelection campaign staff would even consider such a bone headed stunt. Regardless of your own political affiliation, you’ve got to admit that the video is funny.

Bunky just can’t get into the Christmas Spirit until he hears the Ronettes’ version of  “Sleigh Ride.”

Unfortunately, the best vids of that song have been pulled, and we just can’t bring ourselves to post a video of a vinyl record spinning on a turntable, or worse, a picture of an album cover (losers).  BUT, we’re certainly willing to post THIS version. Screw the copyright Scrooges.

So here’s a compromise, a Christmas song with Darlene Love, backed by the E-Street Band (with video splices from, um, “Home Alone“).

That’s Granny Annie, a retired volunteer schoolyard monitor who sends elementary school children to Purgatory for wearing socks with colors that haven’t been approved by the school magistrate.

That was a last minute request from Mrs. Strutts to submit a response to this contest: