I dunno, Babs, but I do know this. I’d rather have that than nothing. 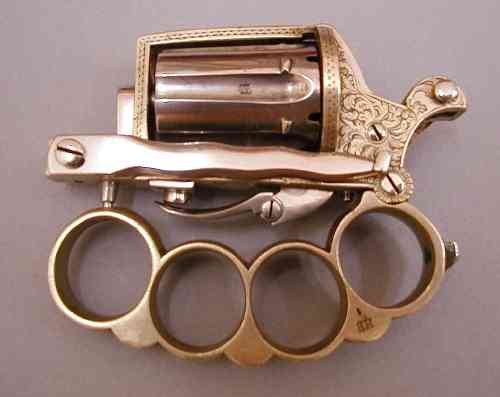 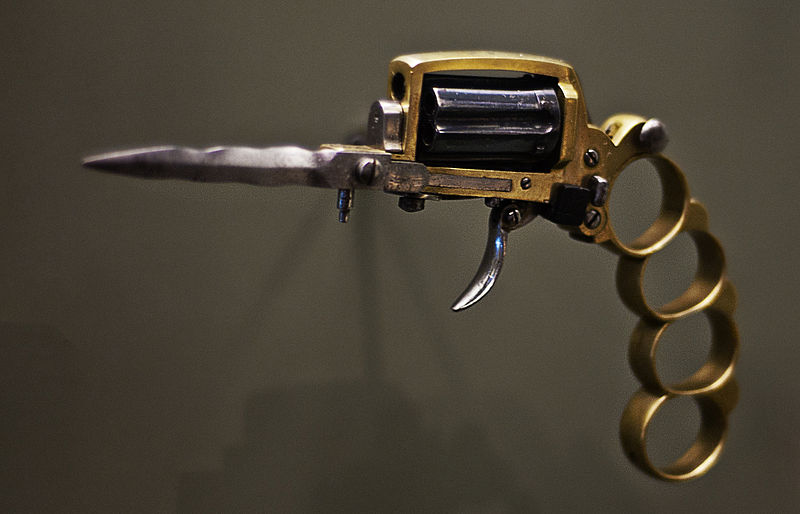 “The Apache Revolver is the Swiss Army knife of guns. Designed in the early 1900’s by the french gang Les Apaches this weapon was easily concealed and it is said that one bullet would always be left out of the chamber so as to not shoot yourself while it was in your pocket. Its range was very limited due to its lack of a barrel but it was an effective tool due to everything it could do, this weapon could shoot, cut and hit and could be easily folded up and placed in your pocket. Sheer Genius.”

The Wikipedia entry contradicts that description. This multi-purpose weapon was presumably designed by Louis Dolne of Belgium in 1860, went into production in 1869, and was discontinued by 1900. Here’s a quick video.

[Top image and caption from here; 2nd image from here.]

Amazing Naval weaponry: Lasers, Railguns and Hypervelocity Projectiles. If this is unclassified, just think of the stuff that is.

Greek Fire was a weapon used successfully to thwart invasions by muslim pirates in the early 7th century.

The Crusades were fought in response to Islamic aggression in the 11th century.

Who were the Barbary Pirates?

Okay, so the carpet caught fire. Big deal. It was an act of God.

Here are the rules for Kingyo-sukui.

Ruining Rock Paper Scissors. Look. Just throw the same 3 times in a row, then double your bet and throw the one that beats your previous three.  Pocket your winnings and leave the neighborhood asap. Coming up next: How to get dibs on a baseball bat.

Wild Man From Borneo by Kinky Friedman. One of these days he’s going to have a Tribute band.

I’m not a “gamer” so I’m not sure what to make of The Stanley Parable, but it looks pretty cool.

[Top image from The Greatest Rock Video Under Two Minutes Ever.]

No idea what this is all about, but I wanna party with this guy.

[Found here and here. The 2nd one (that I messed with) came from here.]

Approximately 200-400 years ago during Japan’s Edo period, an unknown artist created what is easily the most profound demonstration of human aesthetics ever committed to parchment. I am referring to He-Gassen a.k.a. 屁合戦 a.k.a. “the fart war.” In this centuries-old scroll, women and men blow each other off the page with typhoon-like flatulence. Toss this in the face of any philistine who claims that art history is boring.

Ancient Japanese art is a gas – but my hoax-alert antennae are twitching with the reference to “He-Gassen” even though I found another source here.

A revolver made in Spain probably as a single piece because none of my friends and I remember ever seeing one, nor did I find something in the literature. To adapt the 6.35 pistol cartridge the cylinder has two connected rings in which one can insert the cartridges and closing the second ring, the cartridges are safely stored – similar today’s speed-loader. On the back of the strap is a switch, center position will hit the inner circle, left position six hits skipping one in the outer circle and after pushing to the right the firing pin will hit the remaining six cartridges. Under the switch is additional a safety blocking the hammer. It is a tip-down or break-open system similar the Smith & Wesson models. The 3″ barrel has a fixed front sight.

Shut up and pay attention, dork.
You ride in the back.
Rolling in five minutes.
I thought I told you to shut up.

[Update: I’ve been informed that she’s Tank Girl. I’m so not worthy.]