This is a fun one, and Improv Everywhere didn’t need much of a flash mob. More info here. [h/t Jonco]

“It’s such a shame that you became such an issue. Oh dear Johnny, I’ll miss you.”

Breakup songs can be so sad when a family is involved. Pomplamoose is a husband-and-wife team: singer-songwriter and bassist Nataly Dawn and multi-instrumentalist Jack Conte (CEO of Patreon).

That’s a wrap for this edition of The Saturday Matinee. See you tomorrow and we’ll do laundry. 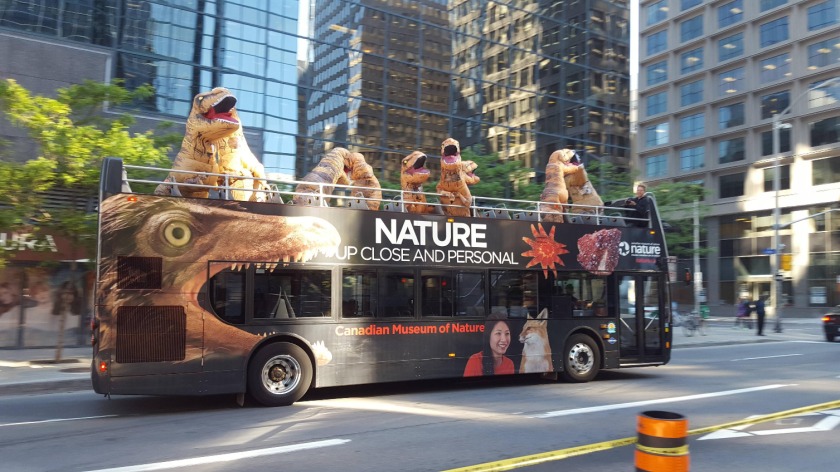 The second-oldest military airfield in Canada, the Shearwater air station at Dartmouth, Nova Scotia, has been home to Canada’s naval or RCAF maritime air squadrons since its inception in 1918. 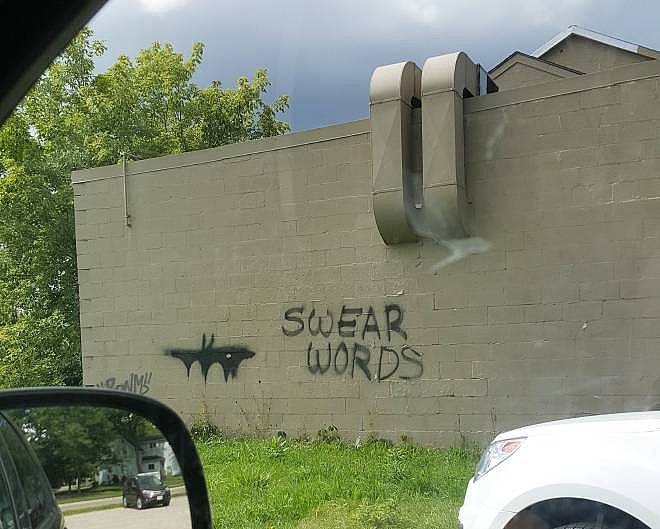 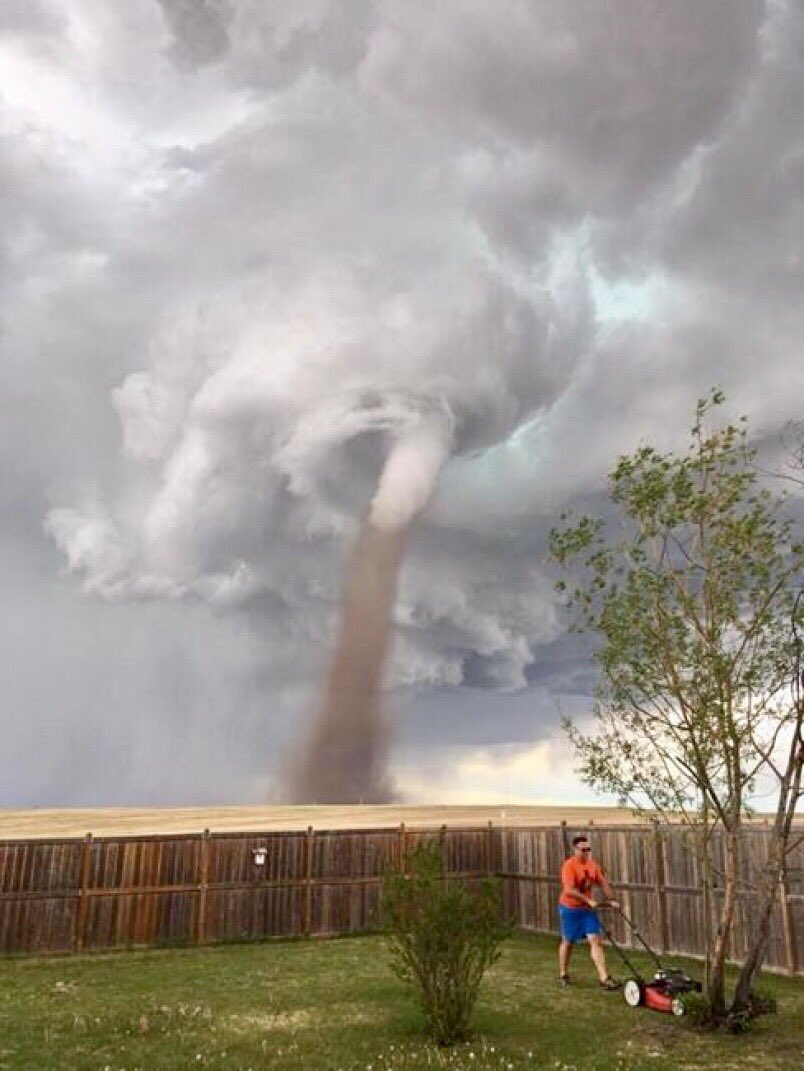 Yeah, I know it went viral yesterday, but so what. That’s the first time I saw it (and I reposted it just like everyone else did, except at least I linked my sources). Besides that, it’s still an awesome pic.

When I was a teenager I witnessed a “small” tornado that passed about a mile or so away from our house. Hail was raining down, sky was black with clear orange sky underneath, the funnel was a churning slow-moving mass of brown with no distinct edges. Next thing I recall is my dad grabbing me by the collar and throwing me into the basement where we hunkered down and listened to the static on the AM transistor radio.

The following day I drove to the neighborhood that took the hit. One side of the road was untouched, but the other was all splinters. 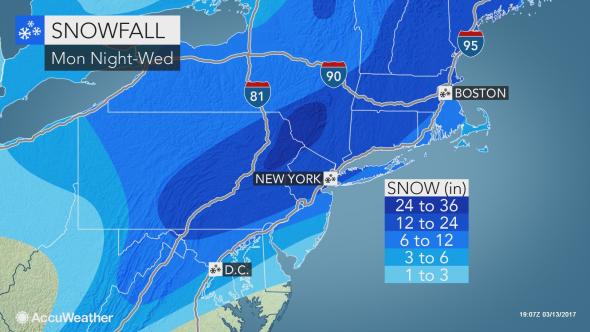 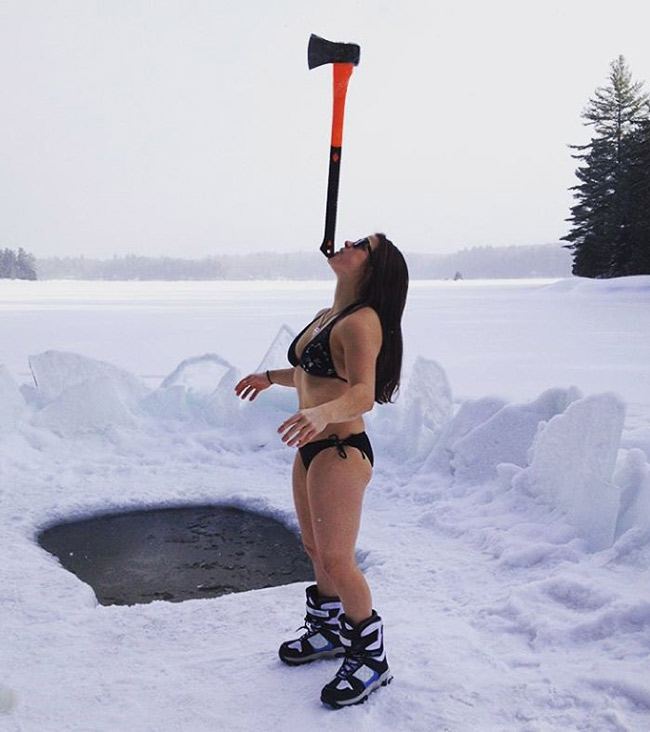 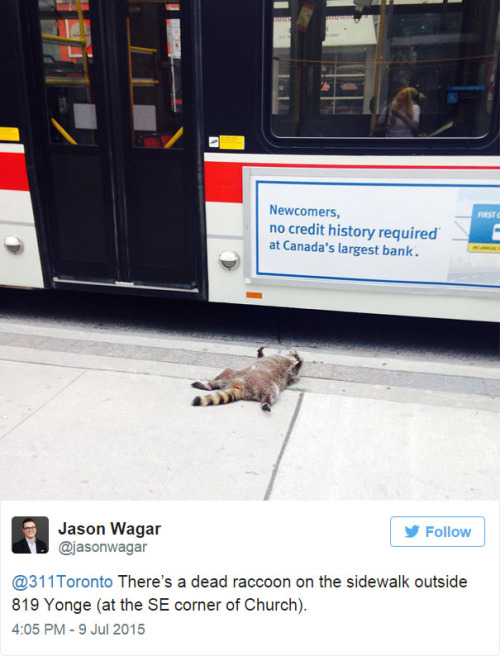 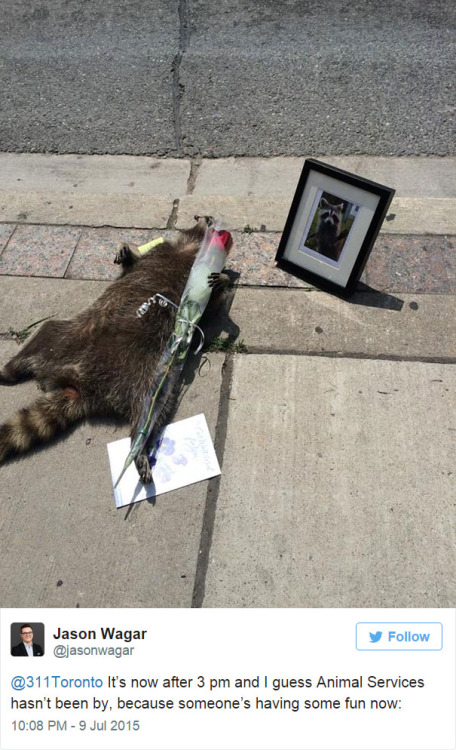 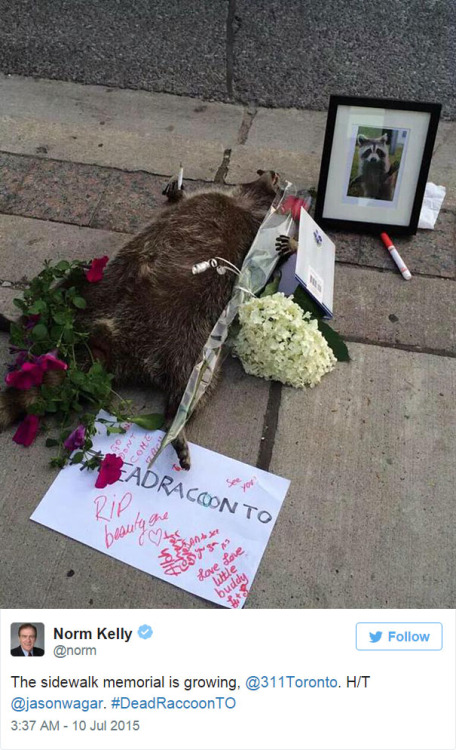 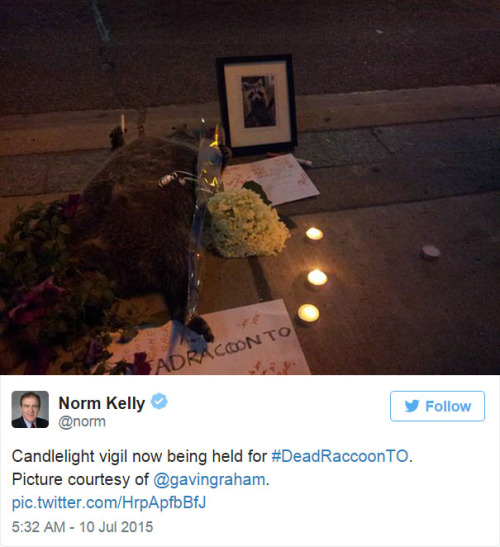 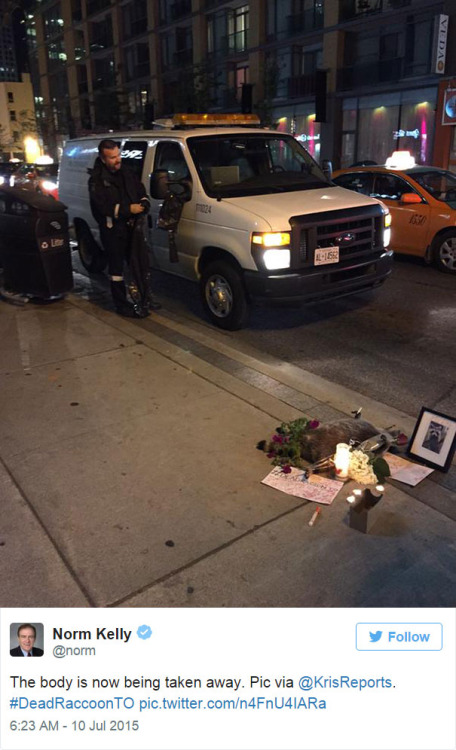 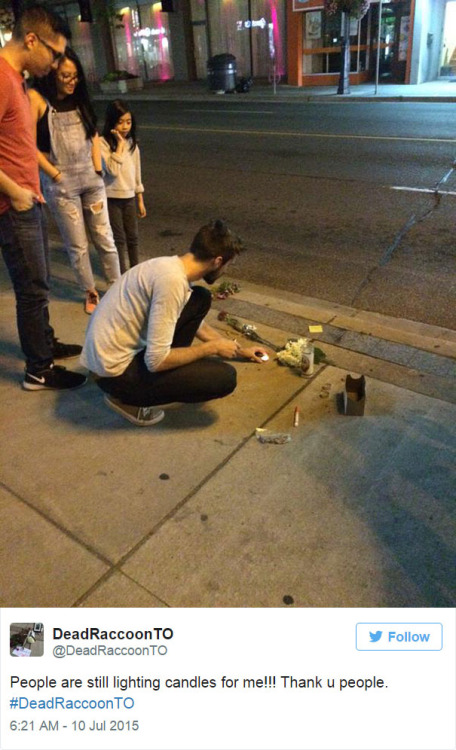 Do people in Toronto still put flowers on Yonge St to the dead raccoon? I saw a bunch of flowers today, I can't believe it! #DeadRaccoonTO

Mexico allows Central and South American immigrants to pass through her borders on 72 hour visas, and most of those people are headed for the porous southern border of the US. As these illegal immigrants pour in, local pressure builds, and now there’s another movement happening at the US – Canadian Border. Canadians don’t like it.

Here’s the full transcript from The Manitoba Herald 1 December 2010:

Border Fence Proposed
by Clive Runnels
The flood of American liberals sneaking across the border into Canada has intensified in the past week, sparking calls for increased patrols to stop the illegal immigration. The recent actions of the Tea Party and the fact Republicans won the Senate are prompting an exodus among left-leaning citizens who fear they’ll soon be required to hunt, pray, and to agree with Bill O’Reilly and Glenn Beck.

Canadian border farmers say it’s not uncommon to see dozens of sociology professors, animal-rights activists and Unitarians crossing their fields at night. “I went out to milk the cows the other day, and there was a Hollywood producer huddled in the barn,” said Southern Manitoba farmer Red Greenfield, whose acreage borders North Dakota. The producer was cold,exhausted and hungry. He asked me if I could spare a latte and some free-range chicken. When I said I didn’t have any, he left before I even got a chance to show him my screenplay, eh?”

In an effort to stop the illegal aliens, Greenfield erected higher fences, but the liberals scaled them. He then installed loudspeakers that blared Rush Limbaugh across the fields. “Not real effective,” he said. “The liberals still got through and Rush annoyed the cows so much that they wouldn’t give any milk.”

Officials are particularly concerned about smugglers who meet liberals near the Canadian border, pack them into Volvo station wagons, and drive them across the border where they are simply left to fend for themselves. “A lot of these people are not prepared for our rugged conditions,” an Ontario border patrolman said. “I found one carload without a single bottle of imported drinking water. They did have a nice little Napa Valley cabernet, though.” When liberals are caught, they’re sent back across the border, often wailing loudly that they fear retribution from conservatives. Rumors have been circulating about plans being made to build re-education camps where liberals will be forced to drink domestic beer and watch NASCAR races.

In recent days, liberals have turned to ingenious ways of crossing the border. Some have been disguised as senior citizens taking a bus trip to buy cheap Canadian prescription drugs. After catching a half-dozen young vegans in powdered wig disguises, Canadian immigration authorities began stopping buses and quizzing the supposed senior-citizens about Perry Como and Rosemary Clooney to prove that they were alive in the ’50s. “If they can’t identify the accordion player on The Lawrence Welk Show, we become very suspicious about their age,” an official said.

Canadian citizens have complained that the illegal immigrants are creating an organic-broccoli shortage and are renting all the Michael Moore movies. “I really feel sorry for American liberals, but the Canadian economy just can’t support them,” an Ottawa resident said. “How many art-history majors does one country need?”

In an effort to ease tensions between the United States and Canada, Vice President Biden met with the Canadian ambassador and pledged that the administration would take steps to reassure liberals. A source close to President Obama said, “We’re going to have some Paul McCartney and Peter, Paul & Mary concerts. And we might even put some endangered species on postage stamps. The President is determined to reach out,” he said.

The US and Canada are not the only countries experiencing an influx of illegal immigrants crossing their southern borders. Check out this image from Vladikavkaz, Russia:

If the Theory of Global Worming is true, there’s going to be a massive influx of people from all regions south of the Arctic Circle, judging from the current migration patterns.

Sure, Canada has Molson’s and poutine, but I’m gonna stay put and watch the parade. By the way, The Manitoba Herald folded in 1877, there is no such person named Clive Runnels, and I am not the author of the quoted satirical article. Go figger. 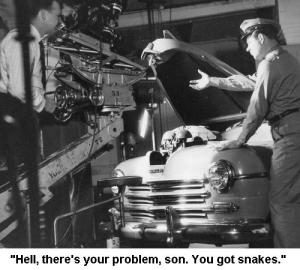 The Party Of The Wealthy.

Canada’s House of Common addresses a potential threat to civilization [via].

This song was a hit on pop radio in the early 1960s, and it’s enough to make you wanna puke. [Wiki: The song was composed by Ghanaian musician Guy Warren in 1956 under the original title “An African’s Prayer (Eyi Wala Dong)”.]

“‘I now have work for 20 years,’ he exclaimed joyfully.” Disturbing true story here.

Classic list of everything blamed on Anthropogenic Climate Change: The Warmlist.

ICYMI Department: The Institute for Centrifugal Reasearch: Gravity Is A Mistake. Must see video [via]. 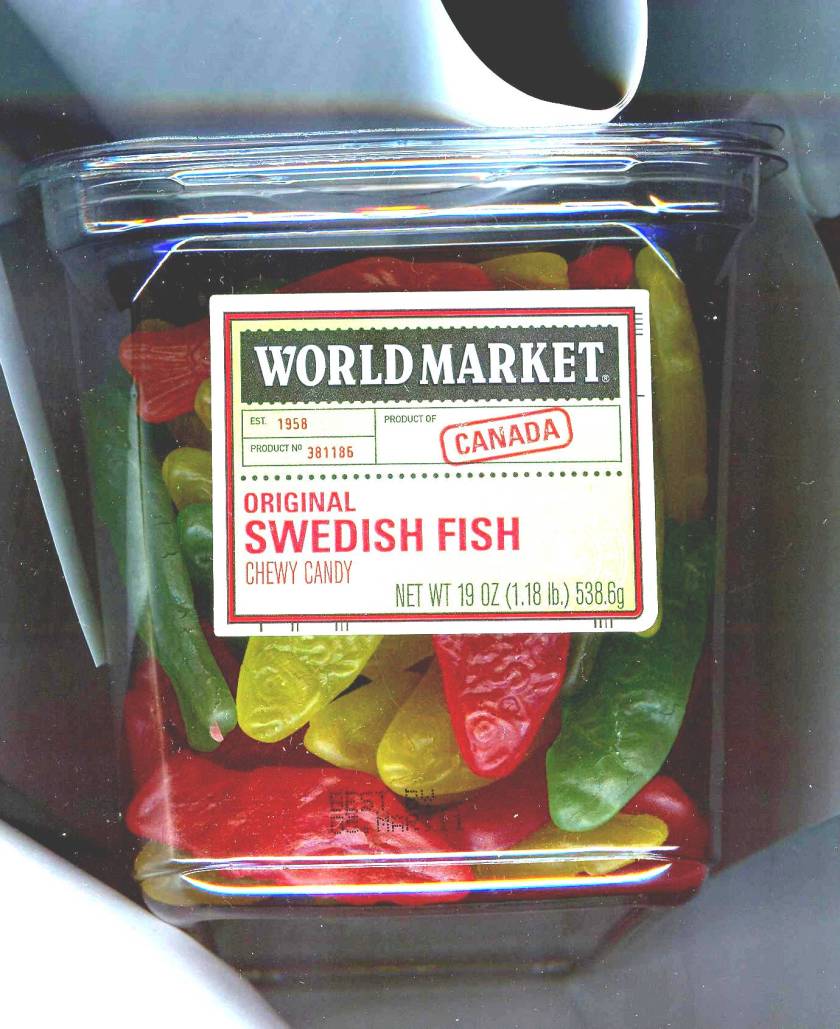 What we’ve got here is 538.6 grams of sticky pogie bait gummiecrap being advertised and sold as Original Swedish Fish (as opposed to the ubiquitous knock-offs). You Canucks ought to be ashamed, regardless of the Olympics, so don’t try to pawn this one off on the Greeks. Where do you get off mocking the Swedes?